This article was written by Casey A. Malik

So, everybody had a pretty shit time in high school, right?

Look, it's not like it is on TV, where someone shoves slushies in your face because you dare to join the glee club or whatever (though I'm sure it really was that bad for some people). But it's certainly the time in your life when you realize who you are, and what comes with that is realizing that who you are may not have mainstream appeal. People you previously thought to be friends might develop in ways you're uncomfortable with, and support things you'd never support. Almost certainly, the same is true in reverse. I'm talking about a lot of things: politics, gender identity, sexuality, or even more trivial stuff like taste in movies or music. In part, this is an inherent part of growing from a child to an adult. As a child, I wanted to be friends with everybody. As an adult, I've realized some people simply aren't worth my time, and other people I like might think I'm not worth theirs. The transition was crushing.

Persona 4 is a standard Shin Megami Tensei dungeon crawler, with a loopy surreal plot steeped in Japanese mythology. The gameplay is fun, and the main plot is perfectly, breezily paced despite being 70 hours long. But that's not what the game is remembered for: rather, the people who played it remember it, I think, because it provided a fantasy of the perfect high school experience: working great part time jobs, being friends with all sorts of people who love you unconditionally, and maybe, even finding a little love?

No video game has ever had a protagonist that's so blatantly a player-insert. Other Persona games have player-insert protagonists, sure, but they make sure to give them just one or two personality traits, to make the game more meaningful. Persona 3's protagonist is angsty, stoic, and aloof. Persona 5's is cool, rebellious, snarky, and deeply moral. Persona 4's, on the other hand is nice...I guess. Even the wiki, which seems to have combed through the entire game for hints of personality traits, resorts to describing him as neutral and extroverted (the latter of which is true of all persona protagonists) I sincerely doubt his official name, Yu Narukami, wasn't chosen due to its resemblance to the English word "You."

Persona 4 doesn't want you to feel like Yu is making these friends, but rather like you are making these friends. This leads to the game having a few major flaws, the first being that Yu is really thin for a protagonist. He has no backstory, no history, and ultimately no story other than being the golden boy everyone likes. It's just hard to get a read on him, and it makes him seem vacant and almost hollow. This is super dissonant with everyone crediting him for the gang's accomplishments and falling in love with him and so on. This makes it clear, ultimately, that Persona 4 is just a fantasy, and undermines its attempts at storytelling.

Additionally, and this is more of a personal thing, but I'm not particularly comfortable with this kind of escapist fantasy. Persona 4 is a narrative game - it's not the Binding of Isaac or like Destiny - but it still seeks to soak up hours of your time. It creates an alternate reality where everyone loves you. It's just not as healthy and fulfilling as consuming regular works of fiction, I think.

Plus, there's the source of my negative feelings towards the game, which I saved for last (and ended up taking up half the piece, sorry!): the fact that the fantasy is an extremely conservative one. Obviously, a game about looking back on high school might be a bit regressive to begin with, but Persona 4 takes this to just an insane extent. If it was made in the US the SPLC would have branded ATLUS a hate group. This is a game where the "LGBT characters" are ultimately just people who were scared they were LGBT because they had gender non-conforming traits. While that's perfectly respectable for real people, it has some bad implications when combined with the lack of actual queer representation. It seems to suggest that actually gay and trans people are people who went down the wrong path, and the game's characters did the right thing by remaining cishet. The fact that you fuck around inside magic dungeons representing their mindstate and defeat bosses that represent the specters of LGBT identity to make them "accept themselves" as cishet draws some ugly comparisons to conversion therapy. The fact that the game seems to even think of this as a journey of self-acceptance kind of reminds me of the ideology of the US Republican party. This is also a game where the weird ugly kid who was a bit obsessed with Dragon Quest turned out to be a murderer with no redeeming qualities, and indeed, only attractive people are worth listening to. And then you consider the lack of ethnic diversity...

Naoto's storyline is probably about as uncomfortable as it gets, to the point where I just skipped it on my playthrough. Yeah, it would have been nice to level up a main party member, but I judged it wasn't worth seeing that shit. Normally, I'd give my own opinions, but honestly its better you see it for yourself. (Click the thing to see it, it's pretty triggering if you're trans, and also, in light mode. In summary, it's basically saying Naoto should accept being born as a woman.) 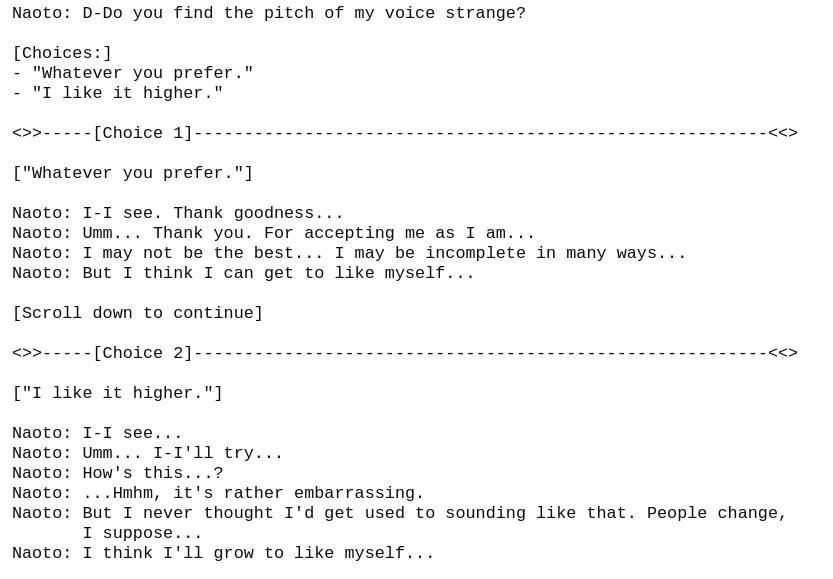 Transcript from this GameFaqs guide

There's also the character of Yosuke. Originally intended to be gay, but later dummied into being heterosexual, he is a huge pervert and also your best friend. This game normalizes creeping on women in ways that make American Pie seem progressive. This is probably the most uncomfortable point of all, as it comes up so frequently it's near impossible to ignore. It's like if the scene where you attempt to catch a glimpse at the showers in Tokimeki Memorial happened once an ingame month, and was mandatory.

The game's conservatism shines through in less ugly ways, too. Consider Yukiko's storyline, where she's nervous about running her family's inn. What you do is help her accept that she should inherit the inn, and rise to face the challenge. However, you could've helped her break away from the expectations placed on her, and it's kinda odd that you help her conform to them. This is pretty much every social link.

Ultimately, the game's conservatism makes it clear who this fantasy is for. If you're anything other than a cishet dude, then you will be taken out of things time and time again, both by the completely regressive portrayals of LGBT characters and by Yosuke. Even if you are a cishet dude, if you're a decent person, you will end up being pretty uncomfortable.

I'd recommend a game I can say is the "gay Persona 4," but unfortunately, there isn't one. I'd say the closest I've played is Night in the Woods, maybe, which isn't even remotely the same thing. Persona 4, despite all it's flaws, is a remarkable achievement from a technical and writing perspective, a 70 hour game with great characters who you can get to know in any way you want. It's a convincing argument that there are real benefits to a game made by a major studio with a big budget: a game like this is just too large in size and scope to have been done by an indie. The scope is really the point too: the day planning gameplay doesn't really make a lot of sense if there weren't a lot of days to plan with and a lot of activities to do in those days, and the breezier pace of something like Tokimeki Memorial (yes, it is literally the only dating sim I've ever played) doesn't quite give you the same feeling of immersion. Unfortunately, the requirement for a major studio to make a game like this means for a truly gay Persona 4...our prospects look slim.

This is my argument for a communist revolution.

(Transparency: I played this game about 4 years ago, and haven't gone back to it since. Although I did look at guides to jog it, I'm going mostly off of memory here.)