This piece was written by Diana of Swordmouse, a contributor who exists to torment me, the editor.

This Christmas, I’m giving all the Fox-News-watching WASPs the gift they actually want: a war on Christmas. They’ve been pretending they’ve got one for years now. It’s about time someone actually delivered.

Some notes before I start:

Christmas decorations kind of slap. I admire the willingness to risk burning your whole house down just to have a tree inside. Especially back in the old days when you didn’t have electric lights and had to put actual lit candles directly on the branches of your special Christmas fire hazard? Way to commit to an aesthetic.

Shiny things are neat, and string lights are neat, and having more lights in the darkest part of winter is neat. I would like to suggest one possible improvement, which is combining sun lamps with tree decorations to create the ultimate treatment for seasonal affective disorder. It probably won’t make your Christmas tree any more of a fire hazard than it already is, probably. Don’t quote me on that.

I really enjoy the Christmas tradition of saving whatever horrid little knick-knacks your children made when they were ten and insisting on displaying them every year to embarrass said children. That’s very fun.

Nativity displays are alright, I guess. I’m not Christian so I’m really not the target audience for them. I also have no opinion on fancy Santas, because I am not Dirk Strider.

The whole Elf on the Shelf thing is bad. The paper Who’s the Boss? "The Elf on the Shelf" and the normalization of surveillance by Laura Pinto and Selena Nemorin explains this far better than I ever could.

I dislike the mistletoe tradition because obligatory kissing is bad. I am also slightly vexed every time people call holly mistletoe because I’m pedantic. Not many people seem to do the mistletoe thing anymore, and it should stay that way.

I’ve never put up Christmas decorations, so I don’t know first hand, but putting up a whole bunch of lights and stuff on your lawn seems like a huge hassle. It probably uses quite a bit of electricity, too. Still, I can’t really object to the waste of time and resources that go into outdoor Christmas decorations, since I’m obsessed with outdoor Halloween decorations myself. Plus, I get a lot of enjoyment every year out of mocking the giant light-up inflatable dinosaur in a Santa hat that our neighbors put up. You know, the traditional Christmas dinosaur. He’s got a little hat.

Really, my true beef here is with the concept of lawns. Grow some native plants on that baby.

There are three valid Christmas movies: A Charlie Brown Christmas, the original animated Grinch movie, and A Christmas Carol (any adaptation.) The messages of these movies, respectively, are:

Other Christmas movies are bad. I have a particular ire for movies about “saving Christmas.” It’s just the War on Christmas for kids, and it’s going to be used as the justification for a bunch of fully grown adult dipshits killing their family members with their in-person superspreader events.

I hate movies where the moral is You Not Believing In Christianity Is Making These Cartoon Characters Suffer. "Not enough people believe in Santa anymore!! :(" Well. It's certainly not for lack of trying, is it. Like, the population of people who believe that the prophet Elijah visits every Pesach has declined too. Wonder why that happened.

I am a huge buzzkill but like. I'm right. Every time I see a movie that's like, "not enough people believe in the literal truth of Christian dogma," I'm like, damn, and you even did all those genocides about it. If not enough people Believe after all that, then it might be a lost cause.

At least American Gods did all mythologies with this "the gods are waning because modern people don't Believe" plot. Personally, I think these types of Christmas movies could gain some perspective by having various non-Christian deities show up to be like, “Wow, that must be super hard for you, Santa Claus. Approximately two people are still alive to worship me because of Christians, but I bet having only half the year and the entire imperialist consumerist machine behind you must be tough.” [dematerializes a little bit more] "Oh, ouch, that one was the Mormons posthumously baptizing one of my followers. But do keep telling me about how difficult it is to suppress elf unions.”

That's right, Rankin-Bass Rudolph the Red Nosed Reindeer, I'm putting you on blast. Those elves didn't even have dental.

There is no valid Christmas music. I will not elaborate on this.

In my Jewish opinion, Christmas doesn’t have enough of a focus on food. Like, sure, chocolate Santas are tasty, and sugar cookies are very good, and gingerbread houses are… visually appealing. But where are the main courses? I don’t know what to expect from a Christmas dinner, and that’s a shame. My family always goes way overboard on the hors d'oeuvres, which I love, but I don’t think that’s a standard Christmas thing. It should be.

As a former child, I love presents! As a current adult, the inescapable capitalist pressure to c o n s u m e is bad. I think maybe we should focus our gift giving on children and buy less expensive gifts. Also, most adults would probably just prefer that you give them money and a nice card.

The fact that the face of American Christmas is the Coca Cola™ Santa Claus is a shame. Other places have cooler traditions, like the Krampus or the Mari Lwyd. I think we should replace Santa Claus with a new icon, and I would like the suggest whatever the fuck is going on in this card. 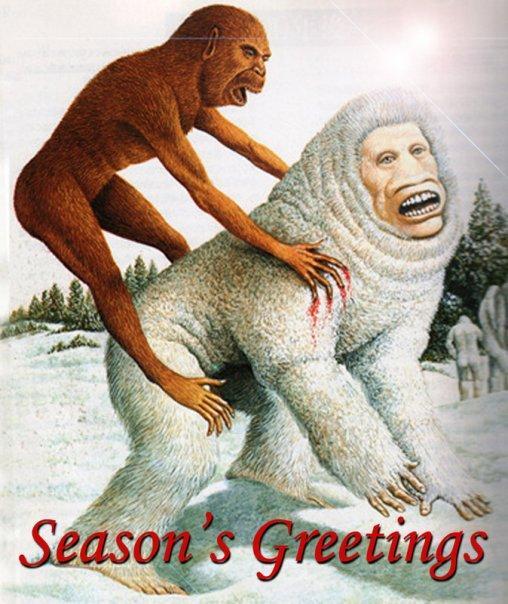 Conclusion
Some parts of Christmas are good, while others are, in fact, bad. This is an extremely hot take. This take burns the roof of your mouth like hot chocolate that you drank too hastily.You should have waited and taken little sips, you fool, you absolute imbecile. Now your taste buds are burned right off your dang tongue and your future sips will be utter garbage. You’ve ruined this hot cocoa experience for yourself. Hope you didn’t waste too much time making this drink delicious with spices or fancy marshmallows, because you won’t be able to taste those now. You should have known better. You do this every time. Every time, you say to yourself, surely this hot cocoa, which literally has “hot” in the name, is sufficiently cool enough to drink at this point and I don’t need to check first. You poor, miserable sucker. You’ve fallen for a classic Hot Chocolate Trick. Outsmarted once again by a tasty winter beverage. This is just another misfortune in your curséd life, and you must bear it once agaiHELP I’M TRAPPED IN A CONCLUSION FACTORY